Sonic Images of the Coronavirus

First the images of absence became common place. Pictures were taken of a newly ubiquitous nothing: of no people on city streets, no people in major plazas of the world, no people at rallies, no people in classrooms, no one in abandoned markets, no one in desolate businesses, no one in churches without mourners where closed coffins conveyed the ever-silenced dead into the afterlife. These empty spaces were also quietly reassuring of state-mandated efforts to contain the spread of disease. For the most part these were images of relative silence. 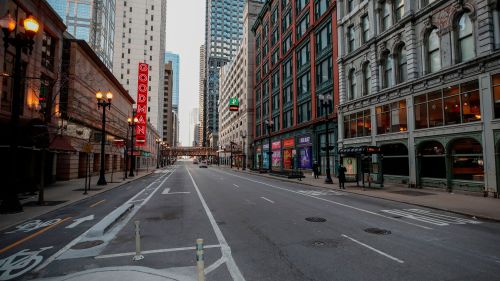 Even as these sonic images of silence bore an alarming resemblance to postapocalyptic scenes of mass extinction, these hushed public spaces were almost always paired with images or descriptions of noisy places where essential workers were busy saving everyone else: these raucous hives took the form of hospitals, warehouses, essential markets, and factories making respirators and PPEs. Live human noise would become equivalent to possible contagion, to the sounds of humans working and dying together. Images of these spaces bear the imprint of these sounds in every respirator, every image of hoarding, every act of crowded public speech.

With time, the images of public silence denoted a sign language of publics that had listened to governments, whose response to the epidemic placed us in all manner of plywood, or brick, or gilded cage. The alternative to our physical isolation was to break the social contract and be placed behind iron bars, in noisy spaces that we now know are a perfect breeding ground for the virus.  Whatever the physical nature of our cages, we who can self-isolate came to see the world through a crystal plane, the metaform of the handheld or computer or television screen ever mediating between our many physical architectures.

Conditioned as I became to the images of silent streets and noisy essential-worker zones, the images of public protest against social distancing initially read as more images of mere contagion. The silence of the public sphere rendered the throngs of protestors (first) in Michigan, California, Colorado, Kentucky, Ohio, Oregon, and Pennsylvania especially loud (even in photographs). The experience was jarring. These protestors were flouting the rules by standing on streets and plazas and carrying signs that said things like “Freedom Trumps Safety,” “Set Us Free,” or (as the hymn goes) “Let My People Go.” Their slogans were shouted out passionately, as they stood in close quarters, oral vapors spreading the disease alongside convivial reunions with like-minded friends, family, and publics. The handheld signs said they were not afraid:  “Live Free or Die” (some will), “I’m not afraid of COVID” (you should be) or “Give me Liberty or Give me COVID” (your liberty will give you COVID-19—this is not an either or prospect).

These early the images of protests  from the political right demanded reopening economies. As a group they are a largely non-compliant public of predominantly white protestors. Especially in rural communities, where the virus was less common, I understood their rage, but not their actions. Small wonder that a few weeks on and we are seeing spikes in states where these first in-person protests occurred.  I knew how to hear and see those early images in terms of the habituated dualism of silence versus noisy sonic image.

That is, until late May, when the words I can’t breathe resurfaced. Even without viewing the video (I haven’t), the image of George Floyd on the (at that point in the pandemic) mostly silent street amplified his suffering first a hundred, then a thousand, and now millions of fold. The phrase, an echo of the same phrase moving through contemporary time marked by violence against the black and brown bodies of Eric Garner, Javier Ambler, Manuel Ellis, and Derrick Scott now appears on the facemasks of protestors, on T-shirts and the walls of cities and town world-wide. The simple phrase forms the seed bed of the din of protest chant and anthem alike, both forms of expression not coincidentally shared in space by the human voice box. As written words placed over the mouths of protestors’ masks, the phrase “I can’t breathe” identifies each wearer as a potential victim, both of police violence but also of the virus.

Even as someone with family participating in the George Floyd protests, my eyes at first saw contagion in these protests. The continued violence against the poor and black and brown communities before and during the pandemic makes me sick, but the images of protestors elicit terrible anxiety as well. Arguably, my seeing contagion is a holdover from the first scenes of vocal rage, from the other side of the political spectrum. But these recent sonic images also feel like they’re planting seeds, like I’m sprouting eyes and ears all over the place.

These new sonic images turn the world upside down, or maybe more appropriately, inside out.

As I write this, I am sequestered with my elderly mother who has lived in SoHo since 1958. In these few weeks in New York City, I have encountered many different forms of the coronavirus sonic image. These mix and mingle before my eyes and around my ears. First the one, the near total silence captured in the image of an empty street, now newly walled off from pedestrians by plywood on every window. Then the other, a throng of masked protestors and a vocal din and sirens and violence and probable contagion captured up close by journalists walking alongside the protestors – brave journalists and citizen journalists putting themselves in terrible danger by being there. And finally, stillness seething with rage as voices and sirens and helicopter sounds move across the city, invisibly vibrating the surfaces of buildings as I watch the empty street from a rooftop.

Sound, more than pictures of various scenes, links us to each other in our daily lives: not just by way of the proximate voice of a friend or a coworker or a family member, but also through the live sounds of shoes crunching debris beneath our shoes, of cars passing, of trains and buses, and public experiences. During the pandemic, many of these sounds almost disappeared or became very rare. But for me, and people like me who can isolate, the threshold between wellness and contagion has been embodied in the sonic baffles between domains of quiet and noise.

As I see and hear the early sonic images with the benefit of hindsight, I understand that to be an essential worker has always meant inhabiting the range of sound environments that connect us to each other but which were, until the protests, closed off to the self-quarantining and privileged-to-be-so, like myself. Unlike me in my silent bubble, essential workers have been in sound and silence throughout the pandemic, weaving back and forth across the boundaries of family and work since this began in earnest in March.

At the level of sound as a diagnostic tool, these protestors (arguably both sets of protestors, but the latter in a more socially responsible way through mask wearing) have inserted actual public speech into actual public space during a pandemic, physically erasing the threshold between essential and nonessential worker by both class and racial forms of segregation. The shrinking distance between a banker, a nurse, and a manicurist, between people on the political right and the political left, between white protestors on one side and black and brown and white protestors on the other, not to mention the rich and poor, feels collapsed to irrelevance, although I know it is not. No doubt the burden of COVID-19 has been felt most vividly by the poor of all colors, but the changing meaning of the images of silence and the images of sonic activity first in hospitals and Amazon warehouses and then in protests of both kinds, means we are bearing witness to seismic shift both in how we see and hear the pandemic but also in how we see and hear responses to it in the imagery of sound.

I am, by equal turns, awake and inspired by the emergent sound of transformation, afraid and diminished by my fear of the virus and for the future, and increasingly alert to how present conditions are reshaping perception.

Hannah Higgins is professor of art history and University Scholar at University of Illinois, Chicago. In addition to articles on the historic and neo-avant-gardes, her books include Fluxus Experience (2002) and The Grid Book (2009), and an anthology Mainframe Experimentalism: Early Computing and the Foundations of Digital Art (2012), coedited with Douglas Kahn. She has received DAAD, Getty, and Philips Collection fellowships in support of her research on sensation, cognition, and information across the avant-gardes and contemporary visual and material culture. She is coexecutor of the estate of Dick Higgins and the Something Else Press.

One response to “Sonic Images of the Coronavirus”