Revisiting the Ferguson Report: Antiblack Concepts and the Practice of Policing

Now is a suitable moment to revisit the US Justice Department’s Ferguson Report.[1] What the report suggests, I propose, is that explicitly disparaging and stigmatizing antiblack racial stereotypes shaped the ordinary, business-as-usual, communications of the FPD, and that we may err in taking these stereotypes simply, or primarily, as evidence of bias or of the intent to discriminate—that is, as evidence of psychological states attributable to discrete individuals.  To be sure, I do not deny the power of such an approach.  Here, however, I take a different tack and suggest that we take FPD employees’ taken for granted, quotidian email communications of pejorative stereotypes as evidence of the workings of a practice of policing in which police officers participated—as evidence, that is, of what the DOJ report describes as a policing “culture.” 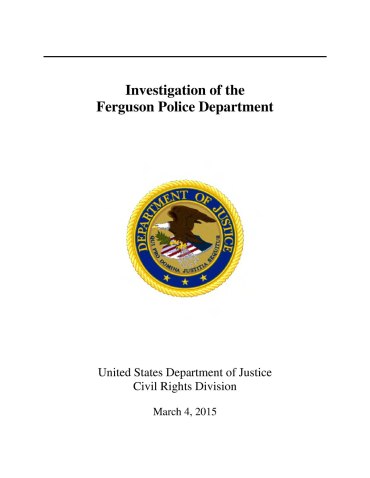 In recent work, law professors Bryan Stevenson and Paul Butler have considered racist policing in a similar perspective.  According to Stevenson, “People of color in the United States . . . are burdened with a presumption of guilt and dangerousness. . . . This presumption of guilt and the racial narrative that created it have significantly shaped every institution in American society, especially our criminal justice system.”[2]  In a similar vein, Paul Butler has argued that “what happens in places like Ferguson, Missouri, and Baltimore, Maryland—where the police routinely harass and discriminate against African Americans—is not a flaw in the criminal justice system.  Ferguson and Baltimore are examples of how the system is supposed to work.  The problem is not bad apple cops.  The problem is police work itself.  American cops are the enforcers of a criminal justice regime that targets black men and sets them up to fail.”[3]  While Stevenson and Butler present historical and sociological evidence for their claims, my related but different aim is conceptually to illuminate the picture of policing and criminal justice that they outline and defend.  More to the point, it is to use the Ferguson Report to construct a partial model of American practices of policing black Americans that captures Stevenson’s and Butler’s suggestion that, typically, the perpetuation of antiblack racial domination through the criminalization of black Americans, especially black men, is “integral” to these practices.[4]

Consider, then, the Ferguson Report’s summary description of the policing culture exhibited by Ferguson’s approach to law enforcement:

Partly as a consequence of City and FPD [revenue generating] priorities, many officers appear to see some residents, especially those who live in Ferguson’s predominantly African-American neighborhoods, less as constituents to be protected than as potential offenders and sources of revenue.

This culture within the FPD influences officer activities in all areas of policing, beyond just ticketing.  Officers expect and demand compliance even when they lack legal authority.  They are inclined to interpret the exercise of free speech rights as unlawful disobedience, innocent movements as physical threats, indications of mental or physical illness as belligerence.  Police supervisors and leadership do too little to ensure that officers act in accordance with law and policy, and rarely respond meaningfully to civilian complaints of officer misconduct.  The result is a pattern of stops without reasonable suspicion and arrests without probable cause in violation of the Fourth Amendment; infringement on free expression, as well as retaliation for protected expression, in violation of the First Amendment; and excessive force in violation of the Fourth Amendment. [I, p. 2; my emphasis]

At least three features of the practice of policing sketched here merit attention.  I note, first, that the Ferguson Report describes a practice of subjecting black neighborhoods to the arbitrary power of police officers.  Because police supervisors failed to hold officers accountable to the requirements of law and policy, Ferguson’s police officers consistently discarded several of the constitutional rights (elsewhere, the Report documents Fourteenth as well as First and Fourth Amendment violations).  In effect, the police force degraded and debased the citizenship of black citizens. In Ferguson, the practice of policing black neighborhoods was a practice of politically subordinating black citizens, for it was a practice of coercively and wrongfully stripping their citizenship of some of its generally treasured prerogatives and, therefore, of rendering it inferior in rank to the citizenship of the white citizens of Ferguson.

I note, second, that the internally related roles of police officer and offender partly constituted the practice of policing black neighborhoods and politically subordinating black citizens in Ferguson.  Indeed, a scrupulous reading of the Ferguson Report—over and beyond the summary description I have quoted here —suggests that the FPD treated black citizens not simply as “potential offenders” whose offences could be financially exploited, but as actual offenders whose offences could be so exploited.  In effect, the FPD’s political subordination of black citizens obtained through the indefinitely many acts of indefinitely many police agents who, through their actions, exhibited a practice structured by the roles of police officer and criminal.

The concept of criminality operative in the practice of policing—not, necessarily, the manifest concept that would be endorsed by way of reflective equilibrium (by comparing our intuitions about individual cases, both actual and hypothetical, to the deﬁnitions we formulate when asked to reﬂect on our concepts)—was, I conjecture, the concept of criminality tracked by the emails cited in the Ferguson Report as stereotyping racial minorities.[6]  In addition, I believe that the concept operative here was a cluster concept, such that having no one property was necessary to make a person a criminal, while having any one of several properties, or several sets of properties, sufficed to make a person a criminal.  I refrain from spelling out the details here, except to propose that one of the properties the possession of which sufficed to satisfy the FPD’s operative concept of being a criminal was the property of being black.  If that suggestion is right, then the FPD’s operative concept of criminality was racially loaded, for it licensed the tendency to interpret black citizens’ rejoinders to police actions, their innocent movements, and their expressions of illness as so many instances of criminal behavior and hence as warranting police actions that in fact violated black citizens’ constitutional protections.  In Ferguson, the role of police officer required subsuming black citizens under a concept of criminality that counted black citizens as criminals just in virtue of being black. An email that circulated among police supervisors and court staff seems explicitly to have tracked and expressed precisely this concept when it “joked about an abortion by an African-American woman being a means of crime control” (I, p. 5).

It is reasonable to characterize the concept of criminality that was operative in the FPD’s practice of policing black neighborhoods as a racist, antiblack concept: a concept that authorizes citizens to infer, from the consideration that a fellow citizen is black, that he, she, or they is an outlaw—broadly speaking, a deviant whose beliefs, character, capabilities, and/or behavior contravenes conventional and mainstream norms and expectations, thereby rendering that person a misfit, an inferior, a dysfunctional  blight on civil society, a threat to law and order, or, at the very limit, something other than human.[7]  Another, perhaps obvious example is the notion of personal responsibility that was operative in the emails sent between police officers and court supervisors in Ferguson, where it seems that having the property of being black sufficed to rule out the possibility of being personally responsible.  A less obvious example is the notion of romantic love, but Darryl Pinckney’s reading of Moonlight (dir. Barry Jenkins, 2016)—specifically, his claim that the film “bestows the capability of feeling romantic love onto a figure that has long been a symbol of predatory sexuality: the big, bad black male”[8]—interprets it as exposing the antiblackness implicit in that notion. As Pinckney views the film, it prompts us to see, to our chagrin, that our operative concept of romantic love excludes the possibility that big, bad black men enjoy tender, amorous feelings of affection. In a similar vein, Chris Ofili’s Rodin . . . The Thinker (1997–98), a portrait of a hypersexualized black woman in the image of Rodin’s famous sculpture, compels us to see that the concept of intellectual seriousness operative in some of our colleagues’ professional practices and some of our fellow citizens’ daily lives excludes the possibility that black women think weighty thoughts.[9] 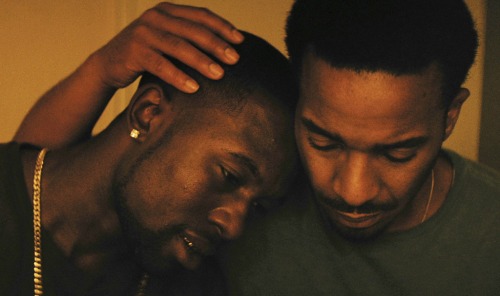 Unnoticed antiblack concepts constitute and shape ordinary practices (like policing black neighborhoods) and involvements (like falling in love and deciding whose ideas to take seriously). When antiblack concepts become the stuff of our entrenched common sense, a part of the point of ideology critique is to render them explicit and unsettle them.  Regarding practices of policing and political subordination of the sort that we have seen in Ferguson and elsewhere, the Black Lives Matters movement has played a salutary role in advancing precisely these aims.  For to take seriously the exhortation that “Black Lives Matter” (and “Black Lives Matter” is not simply a statement of fact, it is also an exhortation) is, in part, to answer a call to acknowledge and challenge the latent yet pervasive antiblack practices and conceptual repertoires that the movement has relentlessly brought to light, demanding that we see and transform them.

Robert Gooding-Williams is the M. Moran Weston/Black Alumni Council Professor of African-American Studies and Professor of Philosophy and of African-American and African Diaspora Studies at Columbia University. He is the author of several books, including the award winning In the Shadow of Du Bois (Harvard UP, 2009).  His current projects include a book on Du Bois’s political aesthetics and a book on the political thought of Martin Delany.

[5] Following Butler and Stevenson, my central claim here is that in Ferguson, Baltimore, and through much of US history racial domination and the conceptualization of blacks as criminals has been integral to practices of policing black neighborhoods and residential communities.  But that is not to deny that there could exist practices of policing black neighborhoods that, without degrading black citizenship, fairly enforced the law.  If such practices were to exist, however, then they would not be defined by the same internally related roles and role-related demands and expectations that have defined the practices of policing to which black Americans have typically been subject.

[6] I borrow the idea of an operative concept from Sally Haslanger and Jennifer Saul, “Philosophical Analysis and Social Kinds, II, Gender and Race,” The Aristotelian Society Supplementary Volume 80 (June 2006): 124.

[7] In the language of John Locke’s Second Treatise, antiblack concepts, at the limit, support the inference that, if a someone is black, he/she/they is “a Criminal, who having renounced reason, the Common Rule and Measure…hath…declared War against all Mankind, and therefore may be destroyed as a Lyon or a Tyger”(John Locke, Two Treatises of Government, ed. Peter Haslett [New York, 1960], p. 274).

[9] As I interpret Ofili’s painting, it lets us see that our operative concept of intellectual seriousness tends to exclude black women, for in the eyes of the “white gaze” they are hyper-sexual and hence incapable of intellectual seriousness.  Ofili’s painting and Moonlight demonstrate what Martin Heidegger famously described as the world-disclosive power of works of art, for they expose the ready-to-hand, antiblack conceptual motifs that contaminate the world, or worlds, inhabited by US citizens.

One response to “Revisiting the Ferguson Report: Antiblack Concepts and the Practice of Policing”